We just upgraded to memoQ server 9.6 because of some significant improvements to webTrans. We ran a few XTRF-memoQ integration tests and so far everything is working as it should. If we have any other XTRF users that run the integration with the latest memoQ version, let us use this thread to make each other aware of any complications or errors. It generally takes XTRF a little longer to confirm compatibility with the latest memoQ version.

Any issues you have noticed thus far?

Recently released XTRF v9.0 is compatible with memoQ 9.7. The improvements related to the document reimport are also part of that release.

Thanks for starting this thread, Sancho. We are thinking of upgrading by EOY and will appreciate other users' input.

And Sancho, just so you know, Pablo and I work together. And if I haven't told you, we did make the final decision to switch to MemoQ with the Smart Project integration. Our plan is by Jan 1 be mostly transitioned to the new tools. We'll keep you informed on how it goes!

This is great news! I'll keep an eye on this thread as we might be upgrading to 9.6 very soon!

Just a kind reminder from XTRF side that currently the memoQ version officially supported in our integration is 9.3. This is their long term support (LTS) version. And from our side we will be doing our best to confirm compatibility with future LTS versions of memoQ as soon as possible after they are released.

Newer versions of memoQ shouldn't be introducing any breaking changes to the APIs compared to the most recent LTS version, so we trust that v9.6 works as fine as v9.3 in our integration, but you should note that we are relying on memoQ guys here.

This is the policy that we've recently implemented and agreed on also with memoQ, after they changed their release policy. The next LTS version is going to be v9.7, which I think is planned for March, and we are on stand-by for it.

Glad to see you are moving to memoQ Mark! I can confirm that 9.6.9 works fine with XTRF 8.8.9. Since there were many memoQ connector updates in the last few minor versions of XTRF, I would recommend updating XTRF to 8.8.9 if you are self-hosting.

We used Plunet from 2010 to 2018 and migrated to XTRF in Q3 2018. We have been using memoQ since 2010, and I can tell you it was always a struggle to get Plunet to release a version that would support the latest memoQ. What Plunet ended up doing was to give us access to a beta test weeks before it released the Plunet update, all while memoQ gave us access to their beta.

We would then test the connector for all sorts of scenarios and reported issues. We never found less than 15 bugs. However, once they were fixed, the working version was often released only a few weeks after the official memoQ version was. I believe that they still do this with user support, but they now have a closer relationship with memoQ and I believe the aim is to release a working Plunet update as soon as the new memoQ launches, so it is definitely possible, I've seen it done with my own eyes. memoQ has also been better in recent years at sharing it's API in a timely manner to partners.

The main issue I saw in the past was that while Plunet did their own testing, we always found bugs because the scenarios they tested did not take into account the intricate workflows and settings that proficient language providers use. Without user testing and feedback prior to the release, the additional costs of support tickets, coupled with the cost of prioritizing development internally, caused them to delay development to ensure everything was flawless.

With user feedback, and it was usually a matter of 8-12 hours of development by the tool provider to make the necessary adjustments. It's important to working upstream with both teams and having users find outstanding bugs before the release.

XTRF can only find so many bugs on its own. They are not daily memoQ users for production purposes.

From speaking with both XTRF and Plunet in years past, memoQ was the most popular integration at the time for both companies.

I think it deserves special attention.

Three things would need to happen for quicker releases.

1- XTRF would need to be willing to cooperate on sharing beta versions and implementing feedback.

3- XTRF would need to be willing to recognize the efforts. (Such as earlier version access or an SMA credit for the connector, etc)

Hi David. Glad to have you on board here. Sounds like another XTRF-memoQ user with extensive experience. I am fully in agreement with your assessment and am eager to see how XTRF responds. We have been lobbying memoQ to take the same approach for their ongoing development of memoQWeb.

Hi Pablo. We are on the XTRF 8.9.10 and memoQ 9.6. I would definitely recommend for you to chat with XTRF before trying to synchronize XTRF 8.9 with any memoQ version. We have come across some significant issues that XTRF is trying to fix right now.

We are using memoQ 9.7.7 and XTRF 8.9.11. Minimal issues for now. As Sancho said, contacting XTRF first is a good idea. You should only test with 8.9.10 and above, as they implemented significant fixes for the integration that 8.9 initially broke.

thank you both, reached out to them and hope to start testing soon!

There were 3 more critical fixes to the memoQ integration. I can tell you first hand you don't want to deal with these, they are crippling. Thanks to the XTRF team for coming through with the fixes. 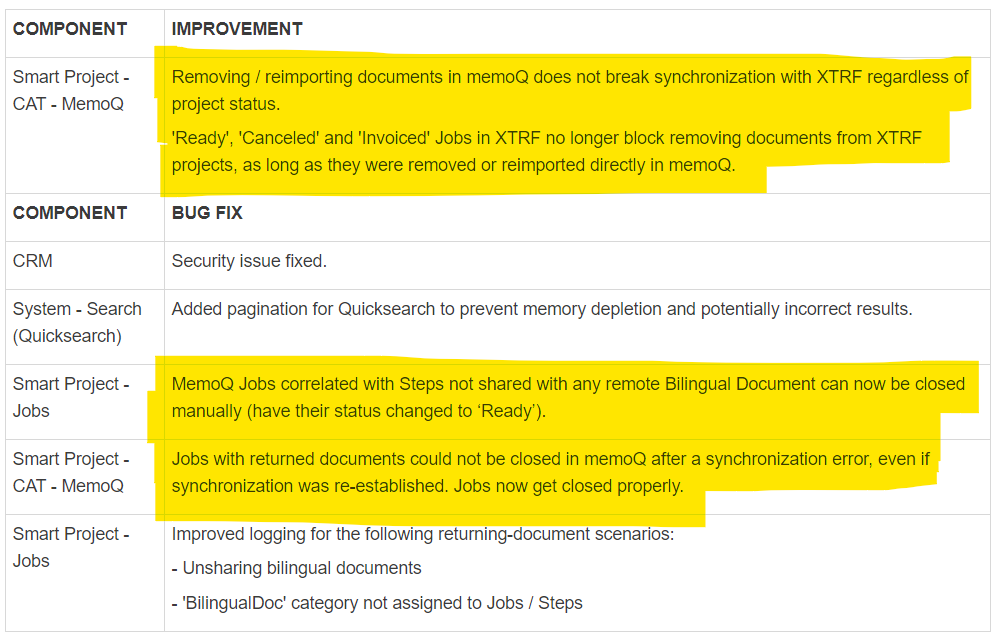 Recently released XTRF v9.0 is compatible with memoQ 9.7. The improvements related to the document reimport are also part of that release.